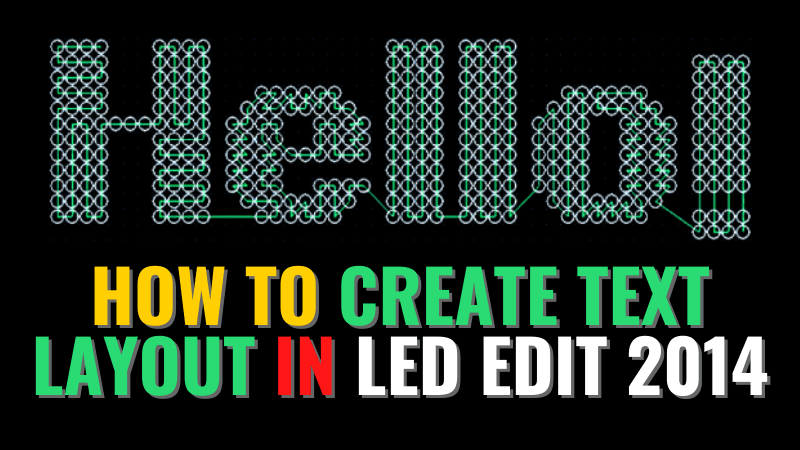 In this article, I’ll show you how to utilize the manual layout designer feature in LED Edit 2014 software to create a text LED layout for your program. I’ve talked about how to make a panel and odd-shaped led layouts with LED Edit’s Manual layout maker.

We occasionally have to create LED displays with text-shaped Pixel LEDs. In this article, I’ll show you how to create text-shaped layouts with LED Edit’s Manual Layout Creator. This lesson is for “LED Edit” versions of the program, not “LED Edit -K” versions. In the future, I’ll offer tutorials for those software versions.

I’ll show you how to make several text-shaped layouts. To begin, you must first create a new project. Please refer to the portion of my previous guide [ Click Here ] titled “Starting a New LED Edit Project“.

Click on “Project Config” in the top menu bar and select “Start Manual Layout“.This will bring up the manual layout design window.

Click on “Text Production” in the top main bar and select “Input Text” from the drop-down list. This will bring up the “Input Text” window.

Type the text you want as an LED layout in the text box. Click on “Font” to view the font Settings.

From the drop-down menus, choose a font, font style, and font size, then click “OK“, The font choices you choose will be applied to the text in the text box. In the “Input Text” window, click “OK“, To insert the text arrangement you just produced, click anywhere in the worksheet.

In your led text arrangement, you may notice certain missing features, superfluous LEDs, and mixed characters, as seen in the image above. Before we wire the LEDs, we need to correct this. Excess LEDs must be removed, missing information must be included, and mixed characters must be separated in the led text layout in led edit 2014. I’ll show you how I changed the above-led text arrangement.

The first character “H” is good, but the second character “e” has too many LEDs, therefore we’ll get rid of them. Select the excessive LEDs one by one using the “Selection” tool icon, then erase the selection with the “Delete LED” tool. If you accidentally selected other LEDs, use the “Deselect” tool to remove them, then re-select the LEDs you want to delete and use the “delete LED” tool to remove them.

The second and third characters are merged. We need to separate it, however, the manual layout editor does not offer a move feature. So that’s how we use the manual layout editor to shift things around. To make a selection, first, choose the “Selection” tool and then click and hold while dragging the mouse over the “H” and “e” letters. You’ve now chosen “H” and “e“, Click the “Cut” tool, then the “Paste” tool, and then drag your mouse cursor to place the characters in the desired location. Right-click your mouse once to place it.

Doing the same to the last character:

We still have one more task to complete: filling in the blanks in the last character. To do so, select any of the “LED Creator” tools and drag your mouse over the areas where LEDs are lacking. This tool will make a link between the LEDs you are making, which we don’t need, so ignore it while putting LEDs. However, after adding LEDs, click on “Quick Delete Connection” tool, then click and hold while dragging the mouse pointer to form a selection in the region where the LEDs were placed to delete the connections.

Now that we’ve fixed our text arrangement, it’s time to connect the dots. We could do it manually with the “Line” tool, but it would be a waste of time. To build connections, I’ll utilize the “Auto LX” tool. To learn how to use it, go to the “Auto LX Tool” portion of my [LED Edit Manual layout Creator Tutorial]. This is my strategy with the “Auto LX” Tool. I’ll go over each character one by one and tie them all together.

Now connect each section in series using the line tool.

For character “e” it’s hard to use “Auto Ax” tool, So I’m going to manually connect LEDs together using the line tool.

For the character “o” I used the manual method because it’s hard to do it from “Auto Lx” tool.

For the character “!” I used “Auto Lx” tool in “Top right” connection method.

Now that we’ve completed connecting the LEDs in each character, we must connect them in series.
For this, I utilized the connection or line tool (connecting each character’s end with the following character). Here’s how it turned out:

This LED Text arrangement must now be connected to the port. Using the “Port Creator” tool, create a port next to the “H” character and click on the location in the sheet where you want it to go. I used the line or connection tool to link the port to the LED Text layout by clicking on the port once and then clicking on the in LED of the character “H“.

We’ve finished building our led text arrangement. Select “Save” from the “File” menu, then provide a directory and a name for the file before clicking “OK“.

Return to the LED Edit 2014 main window by closing the “Manual Layout creator” window. Select “Import (.cxb)” from the “Project Config” menu. Click “OK” after searching for and selecting the file we just made. If you see a notification that says “Import LED lights, Importing Failed 0 lights“. it means that the import failed. You have fully crated and imported your layout successfully. If the number of failed lights is larger than 0, you have a problem with the connections. For additional information, see the “correcting the incorrect connections” portion of my [LED Edit 2014 Manual layout Creator Tutorial]. 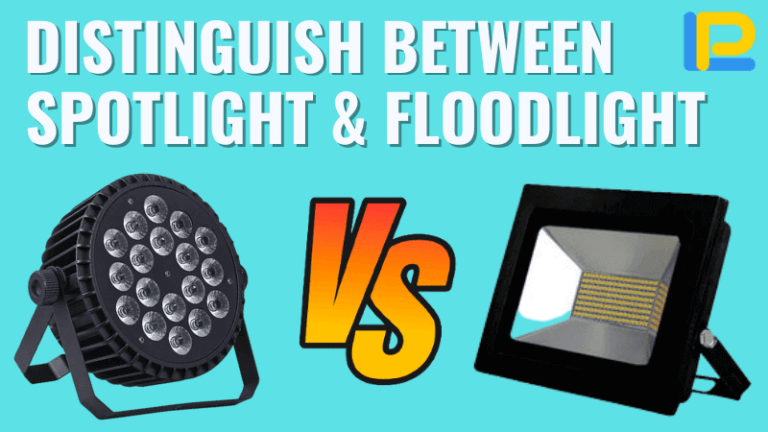 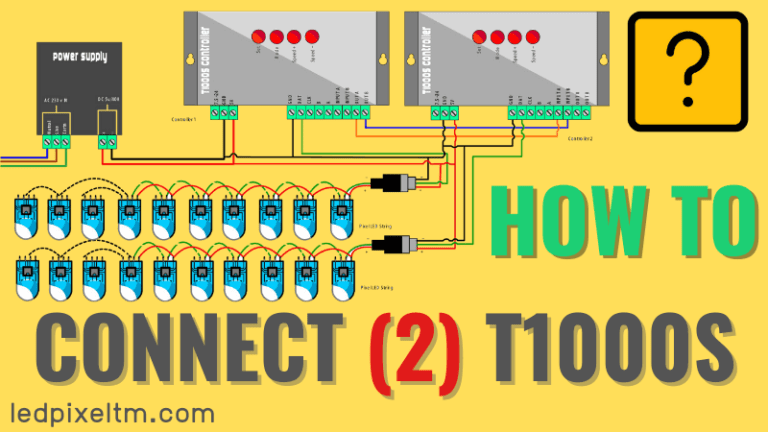 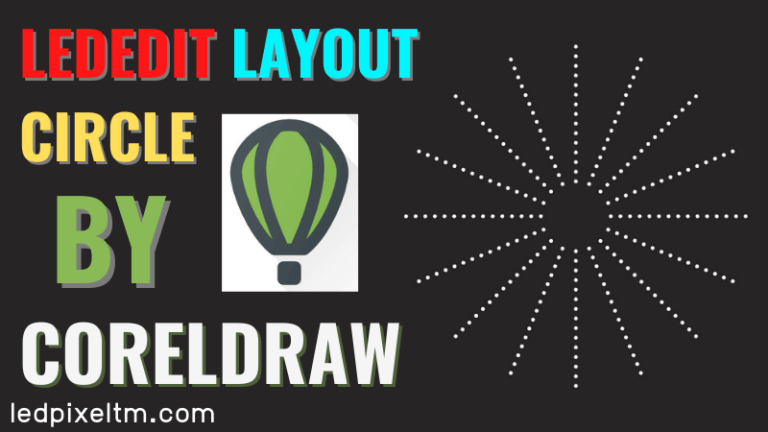 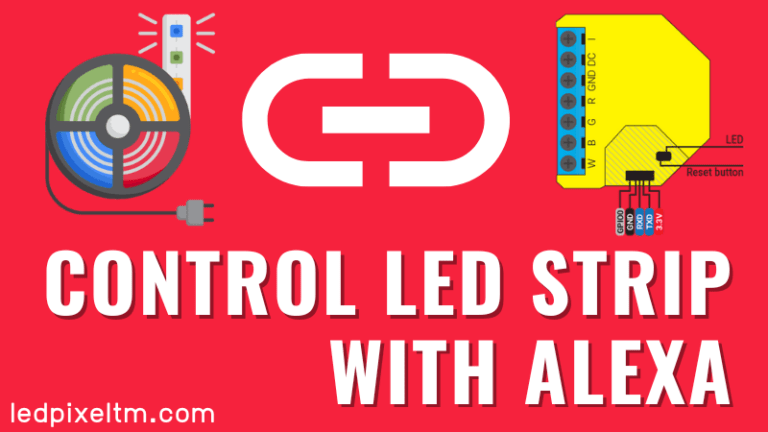